I stumbled across “Kill Taupe” on Etsy years ago.  Jason, the artist behind the magic, describes himself as an…

…uh, yeah … this guy is right up my alley. In fact we were “friends” on Myspace years ago … (memba Myspace?) and he was thoughtful enough to send me one of his pieces. So, my upstairs boasts its very own “Kill Taupe” pink bunny that I walk by everyday and giggle at.

My living room, however, was starting to feel very “taupe” … in fact I looked around one night and said to my boyfriend “I never spend anytime in the living room because it’s too taupe – we need to kill taupe!”  He was like “um … what the hell are you talking about?!”  I explained that the living room had become too bland for me to stand to be in…and there was this artist dude in the mid-west that painted snarky bears n’ stuff…and kill taupe…and in short I needed to inject some color into my surroundings with a quickness.  He was like “you’re crazy, do whatever you want to make you wanna spend time in the living room”.

It cost hardly anything to brighten up the living room.  We started by simply relocating a rug from upstairs.  I wasn’t ready to commit to a full couch makeover as I haven’t found the perfect fabric yet … it’s just one of those things I’ll know when I see it.  So, in the meantime, my friend Jenny helped me turn a duvet cover into a custom cushion cover for the couch and accompanying chair, and I shuffled around pillows from various other places to inject a shot more of color.  For a total of about $40, and about 1 hour of time … I got essentially a brand new living room … or at the very least, one I’m now happy to chillax in.

Recently, while perusing through my dresser drawers looking for something specific, I stumbled across something awesome: diamondy encrusted skull tank tops. I hadn’t necessarily forgotten I owned them, they were just something I hadn’t worn in a while. So they sat idly by, as I kept passing them over for other garments.  The matching white and black tank tops, while adorable in their own right, were slightly shorter than I generally like, hence why they were still in the drawer and not on my body. I smiled just the same as I pulled them out … they have sparkly skulls adorning them afterall.

My wardrobe would not be the same without a smattering of skull adorned items and I’ve got plenty. The skulls were too cute to toss, so what’s a thrifty gal like me to do? Upcycle them into something I can enjoy more often then stumbling across them, sadly retired in my dresser drawer!

While on a typical Saturday afternoon yard sale / thrift store jaunt I found two pillows and suddenly I had a plan. I was gonna sew my bedazzled skulls on to these adorable silk pillows and they would go in my living room! I could have my fab skulls out for everyone to see and not feel guilty the tanks had been hiding in a drawer. I did nearly have to wrestle the pillows out of my friend’s hands as she grabbed them declaring “they would look so adorable on my bed”.

Some tracing paper to make a pattern, which I made by outlining a soup bowl. Some zombie green thread, my ol’ tank tops and my recently acquired thrift store pillows.  After laundering my pillows, I snipped n’ stitched. 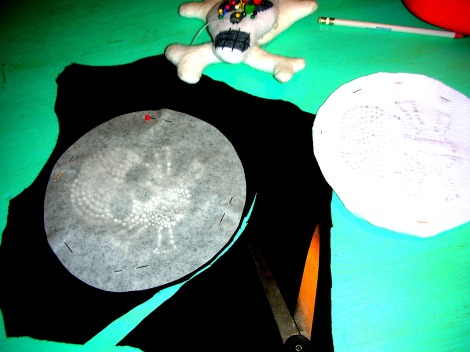 And that was it – two brand new(ish) pillows rock star style. My guy walked in and exclaimed “where did those come from?” to which I responded, “I just whipped them up faster than Dominos could deliver pizza…which is waiting for you in the kitchen.” 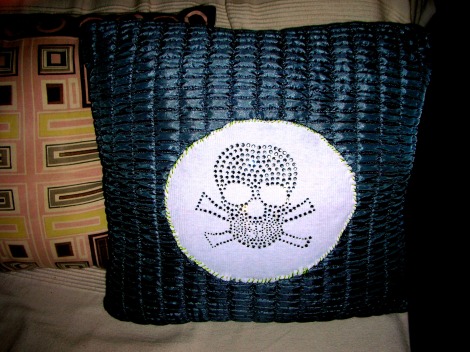